4th of July in San Francisco 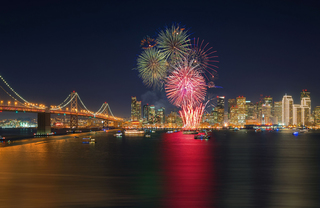 If you’re new to the apartments for rent in SF, then you might not be accustomed to all the upcoming excitement that’s in store for the 4th of July. Unbeknownst to many an outsider, the Golden Gate City pulls out all the stops once Independence Day rolls around, and there are more than a few places for you to head to and get in on the action.

Of course, if you aren’t “in the know,” identifying some of these fine options might be a bit time consuming, but, even if you are aware of how energetic San Francisco gets on the Fourth, a few extra items to add to your list of possible things to do wouldn’t hurt.

Which is what we’ll be providing for you today. We’ve taken a look at the many events and locations to spend the 4th of July this year, and pulled all the best into one list. Read on, and see what festivities might fit your fancy for a Fourth to remember for years to come.

Head to the Wharf

On the northern end of the city is one of its busiest areas — the waterfront and Fisherman’s Wharf. The attractions here draw in folks from all around, and on the 4th of July, there will be plenty of fun diversions for you to enjoy.

For instance, you could head to the riveting and theatrical San Francisco Dungeon. This attraction takes you through the history of the city, using live actors to portray pivotal events in the shaping of the Bay:

“From Gold Rush to Gangs, our characters take you on a journey through the grisly and authentic history of the Bay Area.”

If the idea of looking at stationary exhibits is more appealing, though, you could try heading to the Madame Tussauds wax museum and taking a look at the lifelike recreations of many a famous figure.

Chances are you’ll be impressed by those likenesses, but if you’d rather spend a relaxing time strolling and shopping, remember that you’ll be in the vicinity of Ghirardelli Square, home of delectable treats and boutique stores that will fill almost any desire. The Wharf is a great place for a low-key Fourth of July, but there are also ways you can inject some more excitement into the holiday.

The Oakland Athletics will be taking on the San Diego Padres on July 4th, part of a two-game exchange. While the fireworks will be taking place on the July 3rd match, you can still see the A’s in action on the 4th, and show your support by heading over to the Oakland Coliseum and rooting for the Bay Area favorites. What’s more American than a day at a baseball game?

Want to do something educational come July 4th? A trip to the California Academy of Sciences just might be in order. This famed natural history museum is well-known for its many exhibits, lectures, and workshops; on the Fourth, there will be plenty of learning to go around for your entire family.

There’s plenty on the calendar for that Wednesday, starting with a reading of Tall Tall Tree by Anthony Fredericks, immediately following the Junior Scientist Adventure Coat Check. Later in the morning, you’ll be able to take a look at the Penguin Feeding, Expedition Reef planetarium show, Operation Whale Rescue, and a 3D Tour of the Universe.

There will be plenty of vessels willing to take you out onto the water for the 4th of July, some of them will even be within viewing distance of the fireworks displays, making for a doubly thrilling show:

The ticket prices and particulars will differ from cruise to cruise, but the general idea remains the same throughout. You and some friends take to the water on a fancy craft, surrounded by other fun-seeking guests, then engage in a night of eating, drinking, and partying as the sights and sounds of the amazing fireworks show dominate the background. Speaking of which...

If you’d prefer to see the stunning explosions light up the sky from the safety of dry land, you’ll have plenty of options to do that as well. It’s a yearly tradition in which the city of San Francisco delights, and you’ll be able to check out the bright lights and big sounds from either Aquatic Park or Pier 39.

It won’t just be the fireworks going off during this big show (though they are the greatest draw). There will also be plenty of live music to enjoy for the duration of the festivities. Cover bands like Tainted Love and Killer Queens will be in attendance, putting on family-friendly performances for all who show.

The Options Are All Around the Apartments for Rent in SF

In an area so full of vibrancy, how couldn’t there be? All over the neighborhood of the Towers at Rincon, you’ll find the epitome of “city style” conveniences, from fabulous markets to out-of-this-world restaurants and beyond. Inside, you’ll be treated to spacious and feature-filled residences you’ll not soon want to abandon. What, if anything, could make for a better experience? Check out everything the area has to offer, and consider the Towers your destination for a San Francisco living experience like no other.