Up to 4 Weeks Free!* Call today to schedule at tour!

The Towers Walking Tour of the Financial District 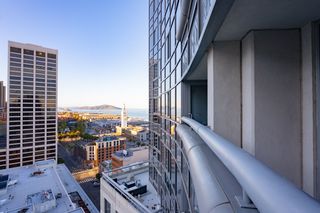 The Financial District is the area of San Francisco that bloomed during the gold rush period, attracting businesses who wanted to get in on all the money to be made from prospecting on the West Coast. Today, the area is still a thriving center for business. It’s bustling at all hours during the week, and can be oddly quiet during the weekends, but its rich history means there is lots of dining, architecture, and art to explore in this unique district.

We’re proud to say our apartments are near the Financial District, so anyone who works at one of the incredible companies headquartered there will essentially eliminate their commute. Check out our transportation guide to understand more about getting around downtown.

This walking tour will guide you from your home at the Towers at Rincon to some of the artistic and cultural highlights of the area and then bring you back to Rincon Park, the green space just across the street.

This tour is about an hour walk, but will take about two hours to complete with stops for photos and a nice lunch at one of the amazing area restaurants.

While not technically in this district, the Towers at Rincon has a great view of the historical Ferry Building, so you will get a good look at it as you head to your first Financial District stop.

The monument at the center of this plaza is a bronze sculpture installed and completed in 1899, making it well over a century old. It was commissioned to honor the Donahues, a family who made their fortune in ironworks, and is a tribute to the labor of those who made their business successful. It was considered immodest at its reveal, and there was a lobby to create pants for the sculpture, which failed.

Completed in 1972, this tower was the tallest in San Francisco until 2017 and now stands as the second tallest. It’s an incredible feat of architecture, both in beauty and in construction. At the base of the building is a public space called Redwood Park, where you can sit for a minute and admire this gorgeous landmark.

When you’re done looking at the Transamerica Pyramid, walk a block away and take a hop, skip, and a jump through San Francisco’s oldest alley. The lines on the ground indicate the old waterline of San Francisco.

Now headed back in the direction of the Towers at Rincon, The Russ Building is a very different-looking sort of architectural treasure from the Transamerica Pyramid. This Neo-Gothic tower was completed in 1927 and was once the tallest building in San Francisco. We love contemplating this while gazing at all the buildings that grew into the sky around it. If you get a chance, check out the majestic lobby.

If you’re hungry at this point in the tour, check out Belden Place, a nearby famous dining district.

Human Structures, installed in 2008, is a statue composed of 62 steel, colorful, life-sized figures. It’s a great way to come back to the contemporary era after a dive through history.

Back to Rincon Park

There’s still plenty to do and see in this area of San Francisco, but our highlights walking tour has come to an end. On your way back to The East Cut and your apartment at the Towers at Rincon, stop in at the gorgeous park across the street overlooking the Embarcadero.