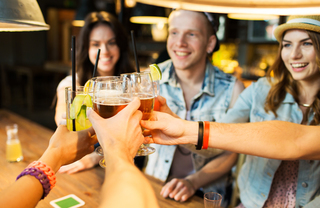 It’s a tradition nearly as old as the invention of taverns and pubs -- hopping around from bar to bar in hopes of a good drink to quench your thirst. The West Coast is no different, and the areas around the new apartments in San Francisco offer some fine establishments to indulge in this very human desire. As noted in the Chicago Tribune, The Daily Meal places six of the best 150 bars in the country in The Golden City, judged on a mixture of their drinks, mixology, bartenders, decor, cuisine, and essentials. What will you find when you venture out into the city? Read on, as we explore some of the best spots to do some bar hopping in San Francisco.

Ranked at #129 on The Daily Meal’s list, The Alembic “specializes in craft cocktails, but also has a good selection of drafts, bottled beer, and wine.” They’ve got a near-encyclopedic menu of cocktails, and the whiskey selection in particular “reads like a written history of brown spirits,” according to Thrillist. Among their many fine options, you’ll likely appreciate the American bourbon, whiskey, rye, and Scotch whiskey. The beer menu is nothing to scoff at either, a treat for those who love to sample local craft brews.

Back in 2015, around the time of their 9th anniversary, the bar underwent a robust expansion, increasing the interior space and granting more room to their patrons with old-school booths and a new room. Now, The Alembic is at the height of its powers, slinging drinks to their dedicated mix of “seasoned cocktail geeks, first dates and tourists.” It’s part of the fabric of the city, and reflection of San Francisco’s magnificent bar culture.

Tradition comes in at #119 on the best bar’s list, “honoring America’s strong drinking traditions,” as the name would hint. They take the trade seriously, as this excerpt from their detailed definition on American bars can attest:

“The American bar, much like its history, has become a melting pot of differences. Whether it be a style, culture or a matter of taste, it all influences and becomes… part of the tradition.”

To that end, they’ve modeled themselves much like an old-school speakeasy, complete with high-walled booths, stained glass windows, and dedicated to showing off cocktails from different “traditions” that include New Orleans, Speakeasy, Tiki, Irish, Scottish, English, Dive Bar, and Grand Hotel. They serve their 80-some cocktails with with “vintage art and unique style,” with selections like the 12-Mile and Southside held in particularly high regard.

Though it has a tendency to get packed, World’s Best Bars notes that the “bar staff are friendly and really know their way round a cocktail shaker: if you don't see anything you like, tell them what you fancy and they'll usually be happy to whip something up.” You’ll not want for options or quality here, and you should ready yourself for a trip through time when you grace the doors of Tradition.

Tommy’s, which ranks #36 on that best bar’s list, bills itself as a restaurant first, but you need only read the fine print, “and world’s best tequila bar,” to get a sense of what this hideaway is all about. In addition to authentic Mexican food, this joint has been serving up 100% agave tequilas since its inception in 1965, never altering that famous margarita recipe and continuing to draw in packed crowds:

“The waits are long, the decor is tacky and the food is nothing to write home about. But that's all part of the charm at Tommy's Mexican Restaurant, where the real draw is the drinks - pure agave Tequila, to be exact.”

You’ll find this bar tucked away in the Richmond District, attracting a mix of people from across the city ranging from “food industry-types looking for a good taste of Tequila to families, groups of friends and locals.” Established by founder Tommy Bermejo and his wife, Elmy, it is now under the auspices of their son Julio (one of the foremost US experts on tequila), who continues to uphold this long-standing San Francisco tradition.

The #34 entry on the list is ABV, the Mission District’s neighborhood bar. A rather colorful description comes by way of Zagat:

“This legit Mission watering hole matches a creative menu of classy American bar bites (snack size but packed with flavor) with a wonderful cocktail program expertly mixed from an amazing selection of liquor, particularly tequila; the roomy, bi-level setup is austere but sleek – and typically a bit crowded.”

The strength here, however, is the whiskey. You’ll find, as Thrillist notes, a “thorough list of rare Scotches, Japanese whiskies, bourbons, ryes, and cask-strength bottles.” The menu stretches further, though, according to World’s Best Bars, encompassing “three beers on tap, cult crafts brews from the likes of Moonlight, as well as three draft wines – very on trend again – from the hip Matthiasson winery.”

This is one of The Mission’s favorite bars for a reason, and you’ll likely be falling in love with it yourself once you head over to have a drink.

Another neighborhood hotspot, Trick Dog, which ranks #26th on the list, is located on 20th Street, and, according to The Daily Meal, “the only establishment of its kind in the Bay Area to be twice reviewed by and awarded three stars from long-time San Francisco Chronicle restaurant critic Michael Bauer.”

They received a nod for World’s Best Cocktail Menu at the Spirited Awards in 2017, and even received a substantial feature in The Daily Beast, who highlighted five drinks on the menu that patrons must try:

Perhaps one of the reasons they’ve managed to stay ahead of the pack for so long is the fact that they consistently switch up the menu (every six months). They’re on their eleventh, and likely have many more to come thanks to their unparalleled success.

The Towers of Rincon gives you a great jumping off point for accessing all of these San Francisco gems. It’s not a bad place to call home either, especially if you’re a fan of fabulous floorplans and five-star building features. Take a look, and prepare to be impressed by a new standard of living in the San Francisco Bay.