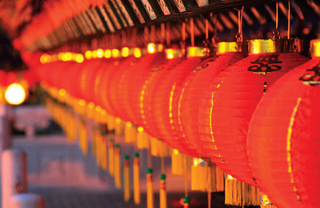 If you’re new to the best apartment complex San Francisco has to offer, or you’re just getting acquainted with this beautiful city, you may not know about the rich and storied history connected to SF and Chinese New Year. Believe it or not, as we enter into the Year of the Dog on February 16, 2018, San Francisco is going to be in rare form celebrating this exciting holiday.

The beautiful thing about celebrating Chinese New Year in San Francisco is that many different people and cultures tend to join in the festivities. Sure, there’s going to be plenty happening in Chinatown in SF, but you’ll also see lots of fun festivities and parties taking place in the downtown area of San Francisco as well. So it’s truly a cultural event for all to enjoy as we celebrate the start of the 4716th year of the lunar calendar.

So, if you’re looking for something to do on Chinese New Year this year, we highly recommend visiting Chinatown or the downtown area of San Francisco to partake in the celebrations. You’re bound to discover something you absolutely love to do. Or, you can try one of the recommendations we’re about to share with you below.

What Does the Year of the Dog Mean?

If you are interested in learning about the different aspects of the up-and-coming New Year, many people will tell you that the Year of the Dog is a great year if you’re looking to take action on new business opportunities. It’s also going to be a fun year for those who like to partake in festivals and other joyous occasions.

The great thing about this upcoming year is that there are going to be a lot of people finding luck in love and marriage according to the experts. But the one thing you need to focus on is your health during the Year of the Dog. Do yourself a huge favor and play sports, eliminate all of your bad habits, and do your best to begin eating healthy. You have to pay close attention to matters of health because they are very important to watch during the upcoming new lunar year.

There’s more happening in the Year of the Dog than you can possibly imagine. In fact, if you’re born in 2018, you are going to be considered an efficient, constructive, and objective thinker. You will be a person with great ideas who’s devoted to following the rules. You’ll respect the value of money, understand power, and you’ll definitely have a secretive side to you.

Most people born in previous Years of the Dog exhibit unwavering loyalty, obedience, and they have the right kind of attitude that never makes them want to quit. In fact, there are many famous celebrities born in previous Years of the Dog like 1922, 1934, 1946, 1958, 1970, 1982, 1994, 2006, and the present 2018. Some of the powerful stars born during these years include Michael Jackson, Donald Trump, Winston Churchill, Bill Clinton, Jennifer Lopez, Jessica Biel, Ellen DeGeneres, Mariah Carey, Madonna, Prince William, Andre Agassi, Susan Sarandon, Queen Latifah, Dakota Fanning, Shirley McClain, Jane Goodall, and George Gershwin to name a few.

Why Is There so Much Noise on Chinese New Year?

It should come as no major shock to anyone, but plenty of people like to shoot off fireworks, beat drums and gongs, and crash symbols to drive away the evil spirits on Chinese New Year. This is a tradition that goes back for centuries and it’s definitely a big part of the New Year celebration for the Chinese people.

Besides all the noise, you’ll also experience a wonderful parade and other amazing festivities on this day. So if you’re afraid of loud noises, or you just don’t particularly like them, you should definitely remember to bring a set of earplugs with you if you plan on attending any of the festivities. You’ll be glad that you remembered to plug your ears because it’s going to get very loud and incredibly exciting!

Speaking of loud, the noise levels are going to be off the chart during the Chinese New Year parade this year being held on February 16, 2018 in the heart of downtown San Francisco. The great thing about this parade compared to other traditional American parades is that you get to see all kinds of cool dragons, lions, and other wonderful attractions in the form of wildlife.

The parade being held in San Francisco is an annual event hosted by Southwest Airlines each year, and the float provided by Southwest is actually 200 feet long and more than 100 men and women from the White Crane martial arts group will propel this Dragon as they walk along the parade route. It really is an amazing sight to behold and one you do not want to miss if you happen to be in San Francisco on February 16 in the upcoming weeks.

As mentioned, there’s also going to be some interesting looking lions parading around the crowd and the streets of San Francisco. But unlike the behemoth Dragon, the lions will be controlled by two people as opposed to more than 100. So they are a lot more manageable as you can certainly imagine.

Lastly, if you want to have an interesting and unique experience on this special day, we highly recommend exploring Chinatown and Union Square on February 16. It should make for a fun and fascinating time like you’ve never experienced before.

Chinatown is going to have a ton of different Chinese New Year activities taking place. The parade starts on Market Street and ends in the heart of Chinatown. Plus Union Square has plenty of exciting things going on as well, so we definitely recommend spending time walking around these places to soak up the amazing culture and wonderful atmosphere.

After reading this, you now know much more about the truth about Chinese New Year in San Francisco. Enjoy the festivities my friends and remember to have a wonderful time!