Coit Tower: A Must-See in SF 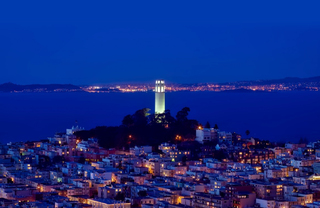 The Bay Area is home to thousands of historic, gorgeous, and world-renowned locations. Entrepreneurs and aspiring artists who call the studio apartments of San Francisco their home create must-see lists for their time here in California. While the combination of their choices could make an entire book, Coit Tower is most certainly among their chosen locales.

This architectural marvel in Telegraph Hill is one of the most historic and artistic places in the entire city. It isn’t just a beauty to behold, though. The Coit Tower has also holds a rich history within its reinforced concrete.

History in the Making

Telegraph Hill has always been the best vantage point for viewing the five surrounding counties, including the San Francisco Bay. Because of this, it became the home of an observation deck that would broadcast information about incoming ships.

The area is one of the city’s original neighborhoods located on its forty-four hills. Like many of those neighborhoods, Telegraph Hill was plagued by fires in its early days due to the wooden buildings of the era. It was at this time that young girl from the area, Lillie Hitchcock Coit, found herself fascinated with chasing fires.

From early childhood on, Lillie Coit avidly aided local firefighters in their efforts to extinguish the continual series of fires in these early San Franciscan neighborhoods. Her efforts made her the mascot for Knickerbocker Engine Co. No. 5 as well as a community hero and honorary firefighter.

Lillie came from a wealthy family, inheriting a fortune at some point in her life. When she passed away in 1929, her will read that a third of her fortune was to go towards adding beauty to the city. So, the county board honored wish by taking her $118,000 donation (over one million dollars today) and created two monuments in her memory.

Art Commission president Herbert Fleishhacker first suggested that the money be used for a memory in Lillie’s home town of Telegraph Hill. After the county board approved, Arthur Brown Jr.’s architectural design was selected, and construction began on the same spot that the neighborhood’s old observation deck resided. Coit Tower was finalized on October 8, 1933.

This monument would later become a designated landmark in 1984, then earn its place on the National Register of Historic Places in 2008. Today, the building stands as an incredible Art Deco design and in remembrance of both the city’s origins and Lillie Coit.

Arthur Brown Jr. collaborated with Henry Howard to create the unique design of Coit Tower. It is constructed from unpainted, reinforced concrete with three nesting cylinders for support. The outermost supports the viewing platform, while the other two support the stairway and elevator.

At the top, visitors can look out over all of San Francisco and across the bay. This an excellent place for photographs or to simply take in how beautiful the city is. From the right angle, you can see the waters from the bay and ocean surrounding the city.