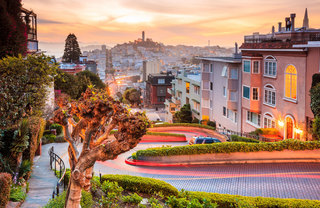 Enjoying life in the South San Francisco apartments? There's plenty to revel in when you call the The Golden City home — culture, beauty, and of course, weird bits of history on various aspects of this great metropolis, like legendary Lombard Street:

"San Francisco famously boasts some of the steepest streets in the country. Whether you’re walking or driving, the varying gradient of the road is sure to catch your attention and give your heart rate a healthy boost. Lombard Street is one of the most unique of the vertically endowed roads and is a great stop to add to any itinerary."
It's often referred to as the "crookedest street in the world." In truth, it's the second-crookedest (the crookedest is Vermont Street, also in San Francisco), but that hasn't dulled Lombard Street's fame. Chances are, even if you aren't from San Francisco, you've seen pictures of the windiest parts of this famous road. Have you ever wondered why a street would be so twisty? What about tips for getting the best shot when you travel there on foot for some sightseeing? Or even the neighborhood that Lombard Street exists in? These are all fantastic questions, and we'll be doing our part to shed some light on the history and mysteries of Lombard Street today, as we delve into the backstory of this legendary little stretch of road.

First Things First: Why Is This Street So Crooked?

It's the most obvious question that springs to mind, and the answer is actually simpler than you might suspect: safety and comfort. Like many streets in San Francisco, Lombard Street, particularly around that 1000 block, is quite steep. Back in the 1920s, the residents of the area got together and suggested adding some sharp turns to this section of the road to increase pedestrian safety, make the grade more manageable for the not so technologically-advanced vehicles of the time, and add some well-deserved aesthetic appeal to the area.

And so it was done. The 600-foot stretch added those eight turns that give it that distinct appearance, and later on, in the late 1930s, it became a one-way street (going down) to further improve safety. It didn't become quite the tourist attraction it is now overnight, though. In fact, Lombard Street didn't start appearing on postcards until the 1960s, and it didn't gain that monumental beauty that makes it such a well-photographed area until they planted the hydrangea bushes, which you'll now find in bloom for nearly the entire year. Speaking of photographs...

There are two ways you can look at this particular topic, with the first being, "Lombard Street is already so photographed by everybody. Why would I want to take a picture?" True, this is a notable tourist hotspot, and you'll find folks snapping away no matter when you decide to head there. On the flipside, though, the fact that it's so well-photographed means there's a lot of advice on how to take some shots that will stand out among the pack, and as photographer QT Luong points out, this is no easy task:

"Other subjects are open to a wide range of interpretation, but there is no mystery about what a good photograph of Lombard Street should do: depict how crooked the street is. That is not an easy task because there is no publicly available high vantage point from which to do so. Most postcards were shot from a private residence. From the bottom, the best one can do is to stand on a driveway just off Leavenworth, in the NE corner, and this is too low to show the red-brick street."

One final pointer you'll want to keep in mind is the position of the sun throughout the day. The natural light can add significant amounts of drama to your shots, but you'll want to time things just right so that you can take full advantage of the light. In the morning, for instance, you can get great shots of cars coming down through the hydrangeas. If you're shooting from the top, though, the early morning will have the sun right in your eyes, so you might want to wait until midday or the afternoon so you pictures aren't overexposed.

Let's not forget all that surrounds Lombard Street. It's located in the affluent Russian Hill section of San Francisco, but wealth isn't the only thing this upscale sector of the city is known for. Sitting right at 1000 Lombard Street is the Haunted Montandon House. Once the residence of well-known 60s socialite Pat Montandon, it supposedly became haunted after a curse was placed on Montandon by a tarot card reader at one of her parties. Strange deaths and mysterious supernatural occurrences then followed, forcing Montandon to have the property exorcised! It's a wild tale (which you can read more about here), and one that adds to the color of this already distinctive San Francisco Neighborhood.

And before we conclude, one final note that you'll likely be pleased to hear. If you've got to drive down Lombard Street and the prospect is intimidating you, don't worry — it's actually easier than it looks. Yes, the bricks are a strange surface to drive over, and it is indeed steep, but the speed limit is only 5 miles per hour. Keep your wits about you, and all will be fine. You'll even get some nice views of Coit Tower and the Bay Bridge in the process, so that, if you're into the San Francisco aesthetic, is a definite plus.

Maybe you can use your newfound knowledge to impress your friends back at The Towers at Rincon? Imagine it — gathering for a "San Fran" trivia night at one of the lovely, spacious apartment residences, sharing some little-known facts about the city's history as you unwind with a strong drink and gaze out at some impressive views of urban paradise below you. Sound like your kind of evening in? Be sure to drop us a line to learn more about what the Towers of Rincon can offer you, and to learn more about how you can call this stellar neighborhood and community your new home.