Facts About the SF City Hall 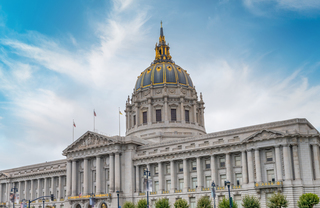 It wasn’t that long ago when City Hall turned 100 years old, and everyone from the swankiest rowhomes to the slickest studio apartments in San Francisco was clamoring about the centennial celebration. A few years have passed since then, and while there may not be anything in particular going on to commemorate its greatness, City Hall remains a magnificent landmark residents of the Bay Area can take pride in and enjoy.

How much do you know about it, though, aside from the fact that it’s a prominent symbol of the city’s government? There’s more history and interesting factoids than you may have imagined in the story of City Hall. Today, we’re going to take a look at some of the interesting tidbits of information that surround this all too important mainstay of San Francisco.

It’s Not the First City Hall

The first crack at big, beautiful City Hall took place in the 1800s. For years, city government run from the Office of the Alcald, then Kearny Street, then the Jenny Lind Theater. In 1872, the city decided it was time for a permanent structure, which was supposed to take a few years and just $1.5 million to complete.

Nothing goes as planned when stark disagreements and political corruption comes into play, however. What was to be a quick construction project ended up taking until 1899 — 27 long years — to complete, at a cost of $6 million (nearly 400% over budget) when all was said and done.

That political corruption we mentioned, by the way left the city with a shoddily completed building made with inferior materials and what could only be described as a “dysfunctional infrastructure.” It set the stage for what was to come next.

It’s the Product of Disaster

Flash forward to April 18th, 1906. Just seven years after that first City Hall was completed, a devastating 8.3 magnitude earthquake leveled the product of 27 years of toil (and graft) in a mere 27 seconds. Rather than rebuild the old City Hall right away, though, San Franciscans took their time, eventually approving an $8.8 million bond to build a new building in a new location, and a design competition was held to determine new City Hall’s design.

The Current Incarnation Was Built Quickly

The aforementioned competition was intentionally limited to architects with registered practices within California, and offices within San Francisco specifically. One Arthur Brown of Bakewell and Brown submitted the winning design, and on April 5th, 1913, construction got underway. The new City Hall was dedicated a short two years later, on December 28th, 1915. It took the city only $3,499,262 to complete the building and $1,412,263 for the land on which the new City Hall stood.

It’s a Big Building That Pays Homage to Some Former Presidents
Take a look at some of the technical details for City Hall, and you’ll see it’s quite the impressive structure.

The building reaches a height of 307.5 feet at its tallest point. There are five floors, with a floor area of 500,000 square feet (two whole city blocks). The building was constructed using 7,900 tons of steel, and that dome on the top has a diameter of 112 feet and reaches 19 feet taller than the United States Capitol in Washington, DC.

Its Architecture Is Considered a Marvel

Specifically, the architecture of City Hall is a style known as Beaux Arts, a style catered to the “the taste and values of America's industrial barons at the turn of the century,” and oft considered to be powerful, formal, and magnificent when applied to public works like City Hall.

Harold Gilliam of The Chronicle once wrote of City Hall, a building he considered a triumph of Renaissance styles:

“The building is not only a link with the city’s extravagant past but with the civic magnificence of earlier ages...The City Hall was the last architectural gesture of San Francisco’s youth.”

That’s high praise for a structure that is simultaneously well-deserving of accolades and often underrated for its aesthetic achievements.

It’s the Site of a Grisly Assassination…

Part of City Hall’s more sordid past is the fact that Mayor George Moscone and Supervisor Harvey Milk were assassinated there in 1978. Former Supervisor Dan White commited the killings, and the event sparked the infamous White Night Riots.

You can read more about the assassination from NPR and The San Francisco Chronicle. One interesting tidbit to note, however, is that the event also helped bring the spotlight to Dianne Feinstein, who would become the first female Mayor of San Francisco (and eventual US Senator.)

...And Some Interesting Achievements

It’s not just brutal assassinations that have taken place at City Hall, thankfully. The structure served to galvanize students of the 1960s in protesting against the House Un-American Activities Committee and championing the cause for Freedom of Speech.

On a more lighthearted note, City Hall is where Joltin’ Joe DiMaggio and the “blonde bombshell,” Marilyn Monroe, were married in 1954. Of course, the marriage lasted less than a year, but it’s one of City Hall’s claims to fame all the same.

It Has a Few Movies Under Its Belt

City Hall has even featured in its fare share of cinematic productions. Look carefully, and you’ll find it as a location in Dirty Harry, A View to a Kill, and several other notable Hollywood productions throughout the years.

It’s Not Far From the Studio Apartments in San Francisco

When you live in perfectly positioned communities like the Towers at Rincon, almost everything seems like it’s right nearby, and important landmarks like City Hall are but a ten-minute drive down the road. In addition to the proximity of all the necessities, you’ll enjoy the comfort and luxury of the spacious residences and five-star building amenities. This is the spot to be in the city of San Francisco. Come check it out, and make it your choice for a new home in the heart of the Bay Area.