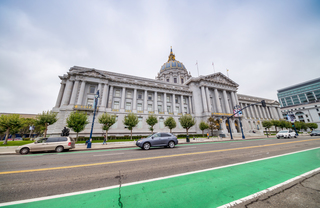 If San Francisco isn’t the most beautiful city on America’s West Coast, it’s certainly in the top 5, with its rolling hills, fusion of architecture, amazing landmarks, and quirky neighborhood vibes. With all the wonderful things to see around the city (at least a few people have rented studio apartments in San Francisco just to catch the sights), there’s no wonder it’s is a hotspot for Instagram shots, and dozens of places around town vying for the title of “Most Instagram Worthy.”

What that means for you is that you can head out almost whenever you’d like to get some amazing Instagram shots and have at it, if you so choose. Of course, you might need a bit of assistance identifying the best spots to head to first, which is where we come in. Today, we’ll be diving into our picks for those “Most Instagrammable” spots to get you started on your photo tour of the city.

San Francisco’s major throughway, California Street, cuts across the city from west to east, one of the longest roads in all of the city at 5.2 miles. There are tons of important landmarks along the way, as the street passes by Huntington Park, The Huntington Hotel, The Ritz Carlton Grace Cathedral, Loews Regency Center, Bank Of America Center, and many others. Perhaps the most coveted view along the way, though, is the one from the top of California Street, as you look down the hill and off into the bustling Financial District.

Around Grant Avenue and Stockton Street, you’ll find San Francisco’s Chinatown, the largest one outside of Asia, and, according to the San Francisco Planning Department, “the most densely populated urban area west of Manhattan.” The hustle and bustle on the streets alone is worthy of a few shots, though, you’ll probably want to get some photos at some landmarks as well, no? Those abound, but the first on your list (and most notable) will be Dragon’s Gate. Built of stone near the neighborhood’s southern entrance, this grand welcome epitomizes the traditional Chinese style. There are also plenty of storefronts and marketplaces you’ll be able to get some nice shots at too.

Sure, you could just head near the Golden Gate Bridge and get a few photos, but for our money, heading over to Golden Gate Park is the real treat. There are, of course, plenty of places in the park where you can get some great views of the Golden Gate Bridge. There are also plenty of spots within the park that are worthy of Instagram photos of their own. Case in point would be the Conservatory Of Flowers. This landmark has been a worthy park feature since 1879, and houses beautiful tropical flowers and plants from around the world. You’ll stroll through sections that look almost like another world, and be rewarded with fond memories and powerful pictures to boot.

South of Chinatown in San Francisco's downtown area, you'll find Union Square -- the Central shopping hotel and Theater District of the city. Upscale boutiques, art galleries, department stores, and fine salons abound, making this one of the nation's most popular tourist destinations. Like many other sections of the city, catching the action on the streets will definitely make for some great photos. Or something more grandiose, however, you'll definitely want to head to the center of Union Square, where you'll find Dewey Monument. This amazing memorial statue stands 85 feet tall, is dedicated to Admiral George Dewey (commemorating his victory in the Battle of Manila Bay during the Spanish-American War) and depicts Nike -- the goddess of victory.

The seat of government for the City and County of San Francisco and a sterling representation of Beaux-arts architecture, San Francisco’s City Hall, located on Dr. Carlton B. Goodlett Place, Was constructed as part of the city beautiful movement and shows off the American Renaissance thinking of the time. This makes for some fine photographs indeed, Worthy of the building’s status as a National Historic Landmark. A marvel of steel, granite, and marble, you can capture this building facade from many and interesting angle. You might even reenact a few of your favorite scenes from the movies that have been filmed here. You'll regularly see weddings and other special events going on nearby, and will never be wanting for interesting activities to document with your camera.

Tucked away beneath the rugged cliffs on the Presidio's western shoreline, you'll find Baker Beach, a spot with unparalleled views of the Marin Headlands and Golden Gate Bridge. While you'll definitely want to photograph some of these stunning views, remember that they aren't the only ones available when you tread to this part of the city. Hike up the Coastal Trail, and you'll be treated to more views of the water, the cliffside, and the natural beauty of the West Coast.

Known as one of the most architecturally fascinating portions of the city, Painted Ladies features a number of Victorian and Edwardian houses, awash in beautiful colors, and ripe for some fine photography. In fact, this is one of the most photographed locations in San Francisco, and sitting amongst the peaceful, postcard-worthy streets, you'll soon see why. Set a few photos of the houses against the stunning backdrop of the city, and you'll have your A+ Instagram shots.

Smooth roads never make for good drivers, the saying goes. Nowhere in San Francisco is this more applicable than Lombard Street. The twisty, curvy road attracts visitors from all over the nation. Just whip out your camera, snap some photos from some interesting angles, And the Instagram shots you've been craving will be yours.

The Studio Apartments In San Francisco Are Instagram Worthy Too

Just take a quick look at places like The Towers At Rincon and you’ll see what we mean. Everything -- the pristine location, the marvelous building exterior, the superb residences -- looks like its ready for a photo shoot. On top of that, the community amenities and comfort-rich lifestyle here mean you’ll often be living like you’re in an Instagram shot. You’ll be well-served in this, one of the most fantastic rental communities in the Bay.