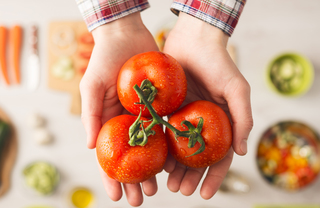 Vegans and vegetarians in the San Francisco are will be happy to hear that they are within driving distance of the two top places in the nation for plan-based diet cuisine. That's right, the apartments in the Bay Area are officially the hot spot for the omnivores amongst us.

San Francisco just landed its spot amongst the top cities in the U.S. for veggie dieters on WalletHub's list. The renowned financial site gathered info from America's 100 largest cities and pit them against each other using key indicators. So, what were the deciding factors that pushed this Cali locale ahead of the competition?

Any health expert will tell you that cutting meat from your diet is one of the best decisions you can make for your well-being. It certainly takes dedication, but there is also the notion that it takes extra cash as well. Thankfully, WalletHub just proved that age old myth wrong.

In order to determine which cities were the best for vegans and vegetarians, the site compared 100 cities using three key dimensions with the first being affordability. The second was diversity, accessibility, and quality (DAQ) while the third was how well the area catered to vegetarian lifestyles. Each of these three categories were broken down using 15 metrics, which work out as follows.

In order to be affordable, a city needed to have a lower cost of vegetarian groceries as well as readily available restaurants serving up veggie dishes at a reasonable price. The average cost of a vegetarian and vegan meal was also taken into consideration.

The number of these types of restaurants, farmers markets, and a variety of other vendors who sell plant-based options per capita was taken into consideration for the second category. For the third, a city would have to prove that its residents were sticking with their diets based on how much food they bought and consumed. It would also have to host meetup events for the lifestyle and prove the availability of vegan/vegetarian festivals.

That's a lot to take in at once, so let's skip over to the results of this statistical spider web.

After all the data was calculated, the city of San Francisco landed 4th place out of all 100 with an affordability rank of 100, a DAQ rank of 2, and a Lifestyle rank of 2 as well. So, besides the obvious farmers market factor, what exactly aided these incredible scores?

Lifestyle is the easiest to pinpoint. Whether it's the annual World Veg Festival, the SF Vegetarian Society, or the slew of vegan meetups, the society surrounding this life choice is immensely prominent here in the Bay Area. The support of the ever active community here makes transitioning from meat and sticking with it an easier, more friendly experience than other parts of the country. It is California, after all. This state tends to be ahead of the curb on health trends, among other things.

Out of this three pronged category, accessibility it the most obvious. There are more places to buy veggie options here than anywhere else this side of the Mississippi. Granted, SF does have the benefit of being a major metropolis but keep in mind that it was pitted against 99 other densely populated cities in America. That means, when compared to an equally large metropolis like New York City, San Fran simply has more veggie options readily available to the masses.

As for diversity, the sheer number of restaurants adopting vegan and vegetarian cuisine bring about a plethora of uniquely diverse options when going out to eat. We simply have more to choose from no matter where we go.

This was the main factor for us veggie faithfuls to look at. While several cities across the U.S. are quickly picking up on the lifestyle, it doesn't mean that change is coming cheap. In a stark contrast to 96 other major cities, San Fran keeps it cheap.

Take Millennium for example. This all vegan restaurant serves up outstanding dishes from pistachio stuffed dates to sweet corn uttapam without their menu ever going over $25. Take it from a vegan who's lived on the east coast, you can pay upwards of that price tag for a mediocre plate of steamed asparagus and carrots at some places. The ability to purchase a decadently flavored meal with nutrient rich veggies without breaking the bank is a luxury that we have the fortune of taking for granted.

Perhaps the best part of this vegan/vegetarian friendly hub is our close proximity to it all. Carmel Rincon is a prime example of the luxury living found in the Bay Area that puts you square and center in the midst of veggie restaurants and SF's vibrant nightlife. It's resort-style amenities cater the diversity of California life, while it's modern, green finishes speak to style and environmental conscience of California. If you're eager to dive into the vegan culture of San Fran, then come experience Carmel Rincon for yourself.