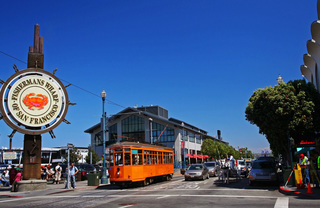 Fisherman’s Wharf — whether you’re south in the city or at the Rincon Center apartments, you know the name, and you know the reputation this bustling neighborhood has gained over the years. It’s popular with the tourists, sure. Being home to spots like Ghirardelli Square, Ripley's Believe it or Not Museum, the Musée Mécanique, and the Wax Museum make that fact a certainty. That doesn’t you should dismiss it all as a way-too-busy tourist trap out of hand, though, especially when it comes to getting a great bite to eat. As it turns out, Fisherman’s Wharf has quite the selection when it comes to delicious cuisine.

Which establishments might those be, you wonder? That’s exactly what we’ll be taking a look at today, as we detail some of the best eateries around the Fisherman’s Wharf, that offer at least a measure of Bay Area authenticity along with their sumptuous meals and delectable drink menus. Hope you’re ready to whet your appetite!

It’s hard to talk about the convergence of great food and San Francisco history without at least throwing a nod to Alioto’s. First founded as a fish stand at stall number 8 along the Fisherman’s Wharf, by Sicilian Immigrant Nunzio Alioto back in 1925, Alioto’s holds the distinction of being the oldest seafood restaurant on Fisherman’s Wharf and has a reputation for some of the freshest seafood around.

That flair for seafood is combined with a bit of Sicilian heritage to serve up some rather tasty treats (the crabs, if you’re interested, are always a big hit), and there’s more still where that came from — delicious soups, lobster, prawns, shrimps, oyster, calamari, clams, fish — if it came from the sea, Alioto’s probably serves it and chances are it makes for quite the meal. As one recent reviewer so succinctly described their experience:

“Had a superb dining experience - great view of a beautiful sunset from the third floor window seat. Food was mouthwatering good - pastas, fish and crab all were perfectly prepared. Our server was knowledgable, friendly and attentive. Overall, a pleasant surprise after riding the creaky elevator up from an unassuming entry.”

And did we mention it’s still family owned? The Alioto’s have taken good care of this establishment, and their reputation, over the years. If you’re interested, you can read up on a bit of Alioto’s history, courtesy of this rather detailed timeline from SFGate.

For another take on the classic San Francisco bayside experience, you’d do well to check out The Grotto, a seafood extravaganza that’s been in the game since 1935. With that much time in existence, they've had the opportunity to devise some rather ingenious dishes for you to enjoy.

Take the Crab Doughnuts, for example — mixed with sweet pepper jelly, crispy kale, and powdered sugar, then served up fresh for a combination of flavors quite unlike anything you’ve had before. Or the Lobster Mac & Cheese, jam packed with lobster, sharp cheddar, tomato, green onion oil — there’s no questioning why it’s a comforting favorite among many who grace the doors of this long-standing establishment. There are even non-seafood items on the menu for those who aren’t that into the “bounties of the sea,” served up in a welcoming atmosphere:

The Grotto, for what it’s worth, still stands in the same spot where it was created. While the decor has changed around a bit, the dedication to great meals hasn’t budged a bit, and you’ll be doing yourself a favor when you stop by for a drink or a quick bite to eat.

Ah, the Buena Vista Cafe, “where Irish Coffee came to America,” they say. The story goes that in 1952, the establishment’s then-proprietor Jack Koeppler, “challenged international travel writer Stanton Delaplane to help re-create a highly touted Irish Coffee served at Shannon Airport in Ireland.” The rest, is history — the two men succeeded in their task, and since that day, the Buena Vista Cafe has been known for serving up some of the best servings of the drink you’ll find in the land.

But what of the cafe itself? It can trace its origins all the way back to 1916, and having gone through some notable evolutions over the years, it’s now home to (in addition to that famed Irish Coffee) a variety of breakfast, lunch, and dinner options to sate your hunger. Eggs and toast are a must if you’re stopping by for that first meal of the day, with choices like the Dungeness Crab Omelet and the Savory Grilled Sourdough Toast standing out as clear favorites. The burgers and sandwiches here always hit the spot, and if you’re around for dinner, you should always leave room for a good steak or some fish & chips.

Any spot that’s managed to stick around for more than a century is one that deserves your attention, at least once, so be sure to stake out some time to head down there and see if that Irish Coffee is really as good as they say it is.

Next Time You Venture From the Rincon Center Apartments…

Why not take some time to stop by one of these local hotspots? It’s basically a straight shot from the neighborhood, and depending on how you decide to get there, you’ll have the chance to see some fun city landmarks on the way. This, by the way, is one of the benefits of calling an ideal downtown location home — the wonders of San Francisco are at your fingertips, and whether it’s dining, shopping, or entertainment you’re after, it all seems to be just a hop, skip, and a jump away. Be sure to learn more about what this stellar apartment community has to offer; contact us, or check out our leasing office to find out what The Towers at Rincon have in store for you!